The Culture High – Breaking Out of the Fog

When Sundog Pictures and Sam Branson broke the taboo in 2011, I do believe it marked the beginning of a new brand of discussion in drug policy.

We were now able to deal with a rational discussion in society without fear or prejudice. It’s not illegal, immoral, or improper to talk about drugs.

The drug policy debate is usually packaged in terms that polarise, and in many ways, it’s become a football team supporting game of two halves. You’re either on one side or the other. To waver from your terrace of support is comparable to a treasonous weakness.

The debate is loud; we have newspaper headlines that scream at us to one degree or another. We have planet academia, indiscriminately launching their voluminous reports into the atmosphere. We have pundits and politicians that jab fingers whilst  telling us what we need to think. The clamour on the thoroughfare is almost palpable, and often vitriolic.

Breaking The Taboo managed to present the global audience with a fresh perspective, devoid of tribalism of pre-existing thought. It told a story.

In 2007 we saw the Canadian team of Executive Producer, Adam Scorgie, Director, Brett Harvey, and Producer/Editor, Stephen Green craft the now cult documentary, The Union: The Business Behind Getting High. With an overwhelming response, and 7 years later, the trio return with a few extra helping hands to explore the holistic and international apparel of cannabis, drug policy, culture, media and politics. You could say that no stone is left unturned.

On October 2nd, The Culture High premieres and is set to take a deep breath with pause for reflection. As Ed  Burns, co-creator of The Wire, says in the film: “We have to break out of the fog”.  The Culture High has an extensive list of characters who give their valuable and preeminent perspective. We have distinguished members of science and medicine  such as Professor David Nutt, Dr. Igor Grant, Dr. Lester Grinspoon, and Dr. Gabor Maté. This is offset by the fortified perspective of law enforcement such as former MI5, Annie Machon, Retired Superior Court Judge, Jim Gray, Retired Deputy Police Chief, Stephen Downey, and Lord Brian Paddick. 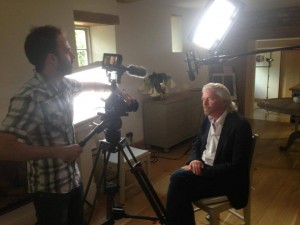 Sir Richard Branson gives his incredibly valuable insight from the Global Commission on Drug Policy. We also see  Snoop Dogg, Rufus Hound, Wiz Khalifa, B-Real, and Joe Rogan give the completely necessary and valuable perspective of social commentary – and this is the point, we need to get real. We need to talk about each other’s stories, and we all need to bring something to this table. Now is the time to participate.

I’m passionate about film. It’s long been my solace, my inspiration, and my raft into  an altered state of thought. I was lucky enough to attend the Breaking the Taboo premiere and the subsequent screening in UK parliament. I witnessed first-hand how film can both ameliorate and provoke. I looked on as the film conductively set the tone for a rational conversation about drugs.

With the release of The Culture High, it’s an obvious understatement to say it’s been a long story. As we look to October 2nd the global icebreakers such as Transform, Release, LEAP, IDPC, and Rufus Hound all join us at the two day premiere, The Culture High hopes to be a small part in the  monolithic subject’s ever growing crescendo. Please, in one way or another, do join us.

iTunes and UK Parliament: Breaking the Taboo with Sam Branson

Breaking The Taboo: The War on Drugs

How we Broke The Taboo and sparked a global conversation...More